Truck underride is what frequently happens when a passenger vehicle collides with a large truck. The passenger vehicle goes under the truck and the crashworthy safety features of the car are not able to work. Or, to put it another way, the truck enters the passenger occupant space of the smaller vehicle — too often resulting in horrific death and debilitating injuries.

Hundreds of people die this way every year — the victims of senseless, preventable death by underride.  Yet, for decades, this problem has been left unchecked. Little has been done to preserve the occupant space and make truck crashes more survivable. Why is that?

Basically, the government has waited for the trucking industry to prove that it could do something to prevent these deaths. The trucking industry, for its part, has been waiting for the government to tell it whether or not, and how, to address this problem — before devoting R & D resources to it in order to come up with solutions. Meanwhile, the unsuspecting traveling public is left vulnerable and precious blood continues to be needlessly spilled on our roads.

The STOP Underrides! Act of 2019 will break this deadlock and get the ball rolling so that creative engineers can put effective underride protection on every truck — resulting in more truck crash survivors who can live to see another day.

In September 2017, Jerry Karth, Lois Durso, and Marianne Karth compiled an extensive list of U.S. underride research, reports, and recommendations beginning in 1896 and continuing to this day. It speaks for itself: effective and comprehensive underride protection is long-overdue. This list is referred to in a post on this topic, including the following notable actions which reflect that the underride problem has long been recognized: 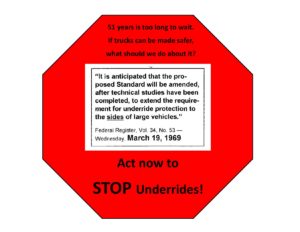 In order to gain a basic understanding of the deadly but preventable truck underride problem, a compilation of helpful resources is provided below.

A complete list of posts on Understanding Underride can be found here:

Installation of an AngelWing Side Guard:

On October 12, 2017, staff from Congressional Offices gathered to hear presentations from five experts on the topic of truck underride to better understand the need for the STOP Underrides! bill. The presentations were followed by a question & answer period as legislative staff sought to understand the problem and solutions of deadly but preventable underride crashes.

The presentations can be found here: Underride Briefing on The Hill; Video Excerpts of Panel Discussion on October 12, 2017

On August 19, 2020. we hosted another Underride Staff Briefing — this time via Zoom. We provided Congressional Offices with the PowerPoint pdf from that presentation, including comments from engineers with expertise in underride as well as underride families: Underride Briefing PowerPoint pdf (inc. links to resources & video)

WUSA9 did an extensive investigation into truck underride. The segments which have already aired are listed here. They plan to shed light on the problem until it is adequately addressed in this country. 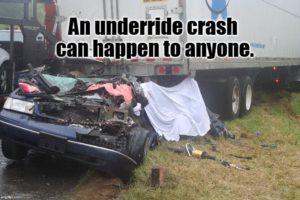