If you were not able to witness the Underride Crash Tests in D.C. in person on March 26, then the next best thing is to see the media coverage of this important event and to view the video footage of all three tests of a car colliding at approximately 30 mph with the side of a tractor-trailer:

VIDEO FOOTAGE from MGA Research of all three crash tests can be seen here:

Third test with NO side underride protection:

Compilation of all three crash tests, including aerial views & views from inside the car:

Here is some of the media coverage of the D.C. Underride Crash Test Event: We hope that this event will continue to raise awareness and that our message to Congress will grow stronger as people sign & share this petition: Congress, Act Now To End Deadly Truck Underride!

If you include your zip code, your signature will generate an email telling your legislators to co-sponsor this life-saving legislation. Please add a Comment, when you sign the petition, which will be included in that email. 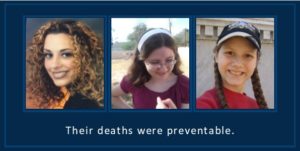 Hundreds of people die every year when pedestrians, cyclists, motorcyclists, and passenger vehicles go underneath trucks. Over 4,000 have died during the past 19 years since the last underride regulation was issued in 1998. Families of victims and safety advocates are calling for an end to preventable truck underride tragedies.

U.S. regulators have debated for decades about how to stop the tragedy of underride deaths — including, since 1969, the possibility of requiring underride protection to be added to the sides of large trucks. But they have not done so, even though engineers have already found ways to solve this problem.

Together we can make the roads safer.

For more information, go to: annaleahmary.com

Cool Breeze Studio has recently released a documentary, Save Lives – STOP Underrides!, that tells the stories of underride victims and their families.